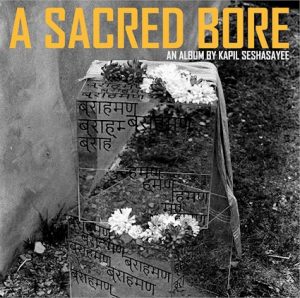 Glaswegian based musician KAPIL SESHASAYEE offers a unique blending of Noise, Industrial, Art Rock and Classical Music in his impending debut album. “A Sacred Bore” is a concept album based around India’s caste system, due for release on September 14, 2018 via Loner Noise. Kapil has already got coverage from renowned outlets like BBC Radio, The Guardian and The Quietus.

To support the debut album, Kapil will be kicking off a mini tour, comprising various cities in the UK and Germany, in September 2018.

Kapil Seshasayee is a polymath, and a true original talent, both as a songwriter and as a soundsmith, a one-man combination of Scott Walker, Mark Hollis, Arca and Richard Dawson, creating something wholly unique. Combining Big Black style drum machine beats with Carnatic guitar ornamentations, stunning vocals and a penchant for unorthodox instrumentation such as the aquaphone, Kapil manages to be truly experimental yet still accessible.

A Sacred Bore — a concept album based around India’s caste system — is a piercing examination of the abusive treatment towards lower caste Indians, aiming to raise awareness of countless barbaric practices still prevalent among South Asian communities both in India and in diaspora. Having already been featured in noted publications The Quietus & The Guardian, Kapil was recently on air with Bobby Friction on the BBC Asian Network, as a featured BBC Introducing Artist. Building upon the narrative of prior singles The Agitprop, A Sacred Bore & Caustic Wit, Kapil expands on issues ranging from the often-overlooked connections between the American far-right and upper-caste Indians to honour killings committed in diaspora which continue to be under-reported.

Kapil has performed across the UK alongside a raft of great and innovative acts such as Raghu Dixit, Damo Suzuki, Victor Villarreal & Future of the Left in addition to festival appearances at this year’s Wrong Festival, Decolonise Fest & Glasgow Mela. He has developed a reputation as an engrossing and engaging live performer, producing his stunning arrangements alone with a variety of instruments and tools at his disposal.