As told by Jaz Wiseman – many thanks to him for giving us the text and images for this great serialisation of the Virus story.

In September 1983, we started sorting out the old garage workshop at Gillingham Youth Centre that Geoff Bray promised us we could use. It was a real mess as it had been used to dump anything and everything donated to, binned by or simply stored and forgotten by Geoff and his colleagues. Amongst the mountain of junk were bits of rusty motorbikes, old sofas and chairs, tools, mannequins (used on the Youth Centre’s Carnival float), a lawnmower, even an old kitchen sink – it took us a whole weekend to properly sort it out until we were left with an empty room (although we did keep a small workbench as it had a vice and we thought that might come in handy for our on-going homemade efforts in musical equipment).

We moved all of our equipment, one Sound City 120watt PA head, two old disco speakers, my £15 guitar used by Bowz, Gilly’s drum kit, the communal Hondo bass and Crabby’s guitar into the room and it suddenly seemed massive. Nymphomania had a couple of practices before we realised the room wasn’t really soundproof – fortunately Bowzer’s brother Phil worked on the dustcart and came to the rescue with a transit van full of old material that was used in electric blankets and had come from a factory that was closing down in Shaftesbury. Me, Bowz and Phil hung the heavy material from the roof like theatre drapes by nailing in into the ceiling, leaving about a 6 inch gap between the fabric and the brick walls and amazingly it seemed to work – Phil was great, Bowz lived with him at the time and he was always looking out for us. A week or two later Bowz turned up with a red 60s Burns guitar that Phil had rescued from the dustcart – the electrics were knackered and the scratchplate broken but we improvised with some plastic to fix that and between us somehow managed to solder it back to a working order. 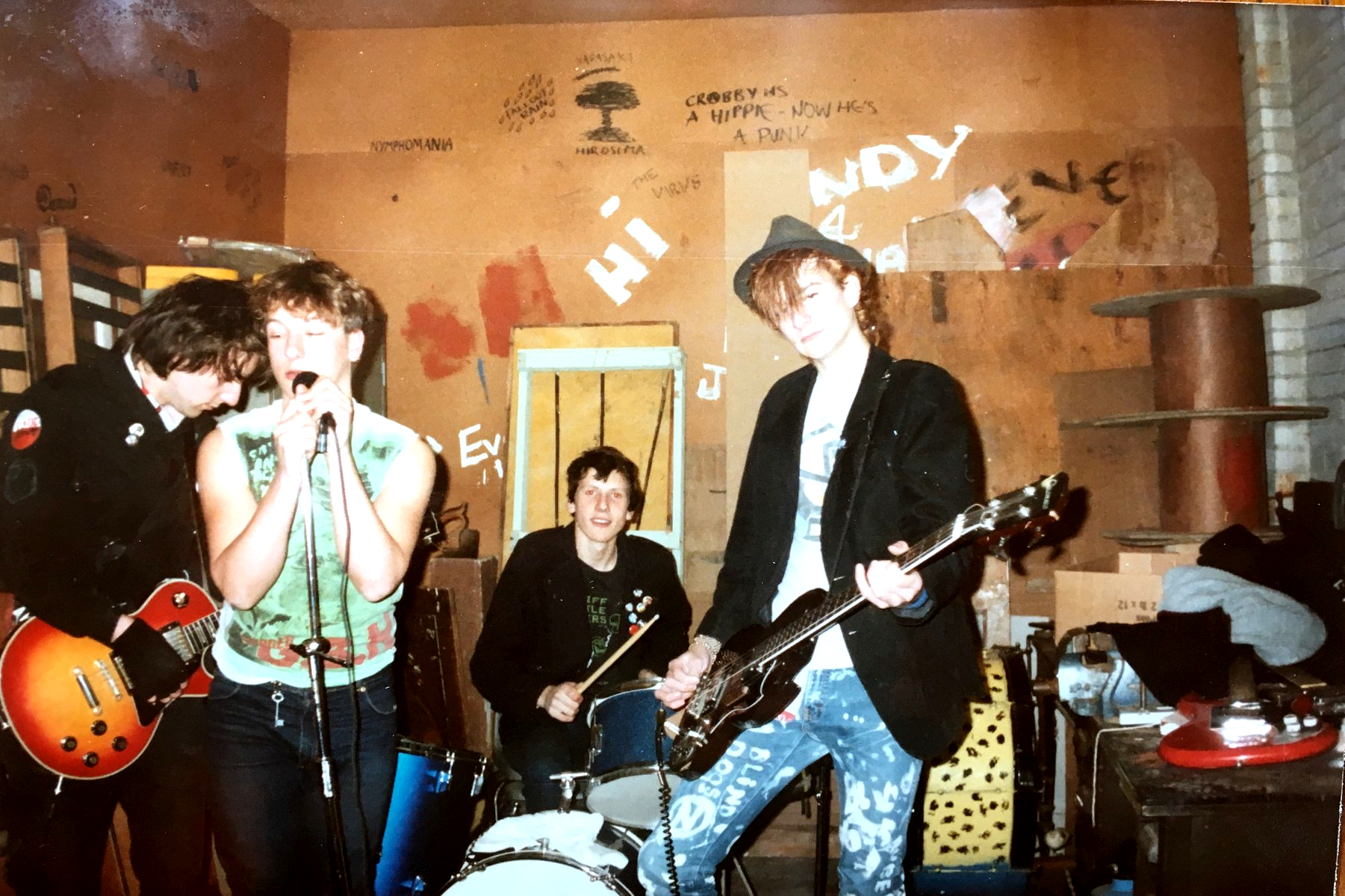 Our equipment list also grew as Geoff Bray took pity on us seeing my homemade microphone and gave us an old one from the Youth Centre’s disco equipment and Crabby bought himself a fourth-hand Sound City guitar amp, complete with spring reverb that when you knocked the amp it sounded like a small bomb going off, so it now meant only the bass and vocals were going through the PA. Geoff asked us to pose for a few photos so he could show his superiors how he was keeping the youth of Gillingham off the streets and out of trouble. To make things even better Geoff only charged each of us 20p each to practice, 80p a night for band practice, what a bargain.

As Nymphomania continued to practice, The Virus were beginning to get things together, Bowz and me had plucked up the courage to ask Rich Brock to play drums and got a yes from Des to sing although when we first started practising it was many as a three-piece with just Bowz, Rich and me. This was actually quite beneficial as it meant we could actually work on ideas without having a frustrated singer hanging around hurrying us to get on with it, not that Des was like that, he was very laid back about it all. Something twigged at this time with Bowz and me that having seen lots of bands live that basically the bass and guitar needed to play the same root notes – so if Bowz was playing a G chord on the guitar then I should really play a G note on the bass and of course, that the guitar and bass should be in tune together. These are basics when it comes to being in a band but we had no-one to tell us these simple things, we had to work that out for ourselves. This need to be in tune together was something that Crabby seemed to ignore – he had his own style, cacophony or bust, it worked but it made Nymphomania very unlistenable and made The Virus seem incredibly tuneful in comparison. 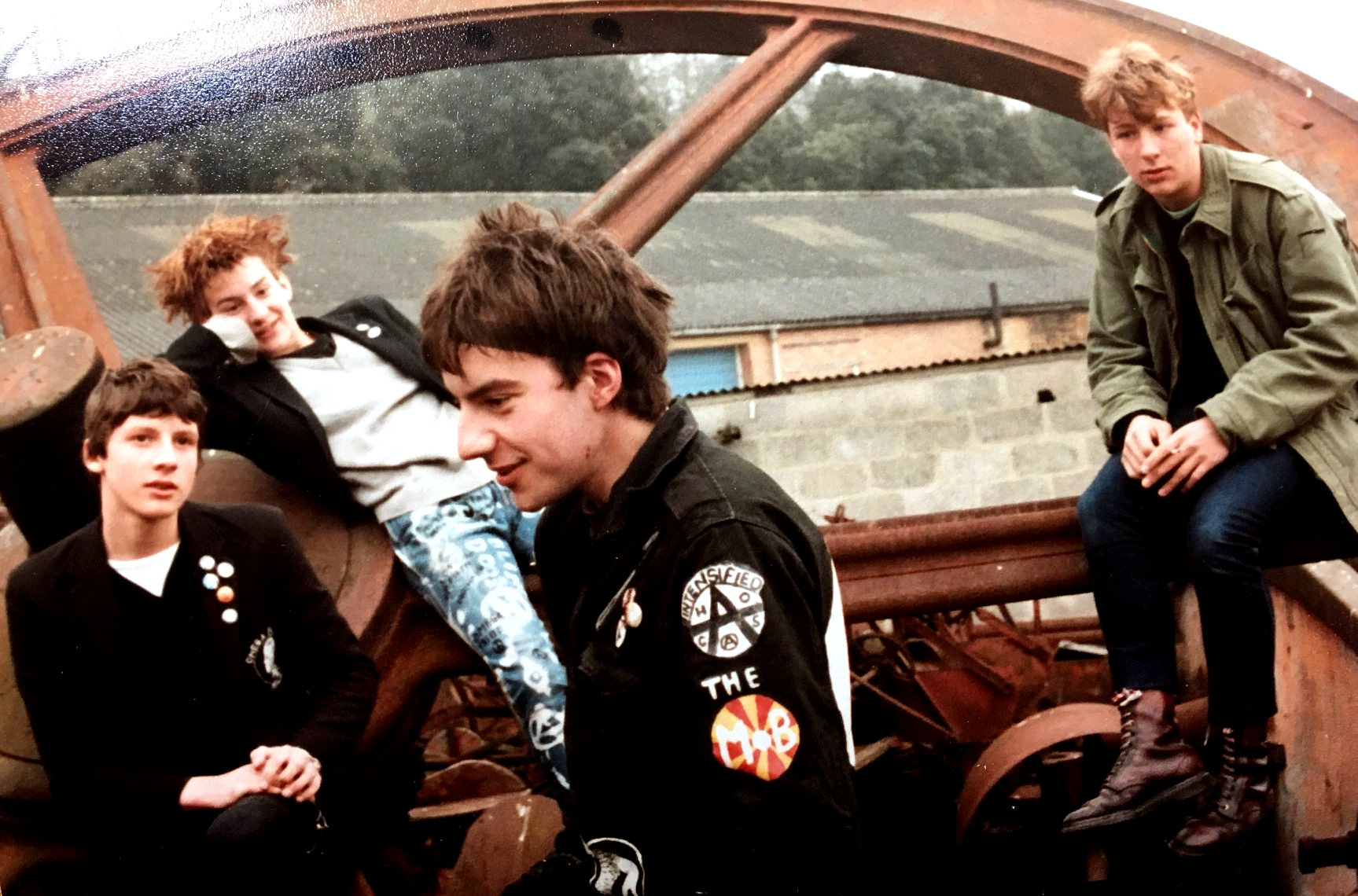 Somehow Crabby managed to blag Nymphomania our first gig in early October supporting the Blind Dogs at Tapps in Milborne Port – a regular haunt for local bands in the surrounding area, the venue being in a cellar under the hotel above. The Blind Dogs were a relatively new punk band having formed from the ashes of two other local punk bands, Suspect from Wincanton and Phobia from Ditcheat/Bruton, who were really good and could have easily done an EP on a label like Bluurg. The two bands had done a number of gigs together and we’d seen them both quite a few times. Blind Dogs took their from the Rudimentary Peni song and bassist Chris Dent and guitarist Spencer Kelly were generous and kind with the friendship and time to us – they knew Nymphomania were crap but they took pity on us and gave us a chance and I’m eternally grateful they gave us that debut 20 minutes.

Not deterred by our dreadful debut, we organised a return gig for Blind Dogs at the Youth Centre the following month and Nymphomania would again support giving the teenagers of Gillingham a chance to witness us now we were a ‘gigging’ band. I’d hoped that The Virus might had been able to play too but we only had about six songs at the time, three of which were covers, Hiroshima by Dirt and Tube Disasters and Sick Butchers by Flux of Pink Indians so we decided to wait until we had at least eight songs before we would make our debut. I don’t really remember much about the gig but the poster says it was 50p to get it – bargain bumpkin DIY punk!

Between Nymphomania and The Virus we were practising for three hours at a time, five nights a week, this meant that we were beginning to make rapid progress in our ability – we could actually hold a very basic dirge together and that room became our sanctuary, safe from the madness of the outside world we created our own madness inside those four walls. We laughed so much back then, mostly at our own shear levels of crapness but it was ‘our’ crapness and that’s what made it important. 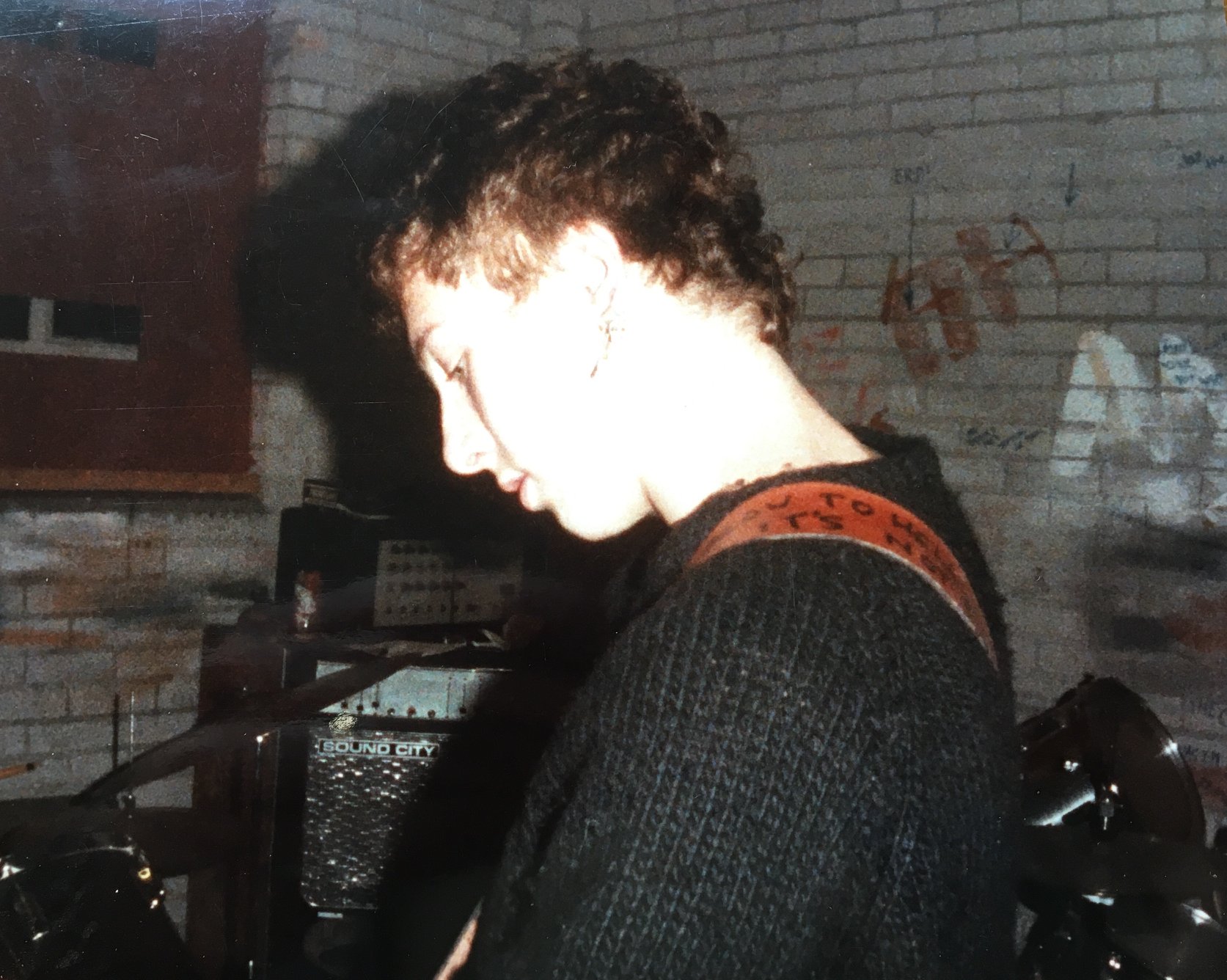 One day Crabby came to practise and said we needed a backdrop and that it should be for No One Smiles In Moscow as that was going to be the song on the A-side of our, imaginary, debut single and he had a rough idea of what he wanted. He then volunteered me into doing it as I was ‘doing art’ at school and the only one who could ‘draw’ – I use that term very loosely as although I was doing art, I basically did as little as possible in art lessons and was just counting down the days before I could get out of the hell hole that was Gillingham School and especially away from it’s tyrannical headmaster John Webster who I had daily run-ins with.

I managed to get an old double bed sheet and painted Crabby’s backdrop for him, Nymphomania written in dripping blood style at the top with a big toothy smile underneath, a bullet shattering into the teeth and No One Smile’s In Moscow in similar bloody text below, all on a lurid orange background. Everyone in the band seemed to like it so I was quite happy with my efforts. 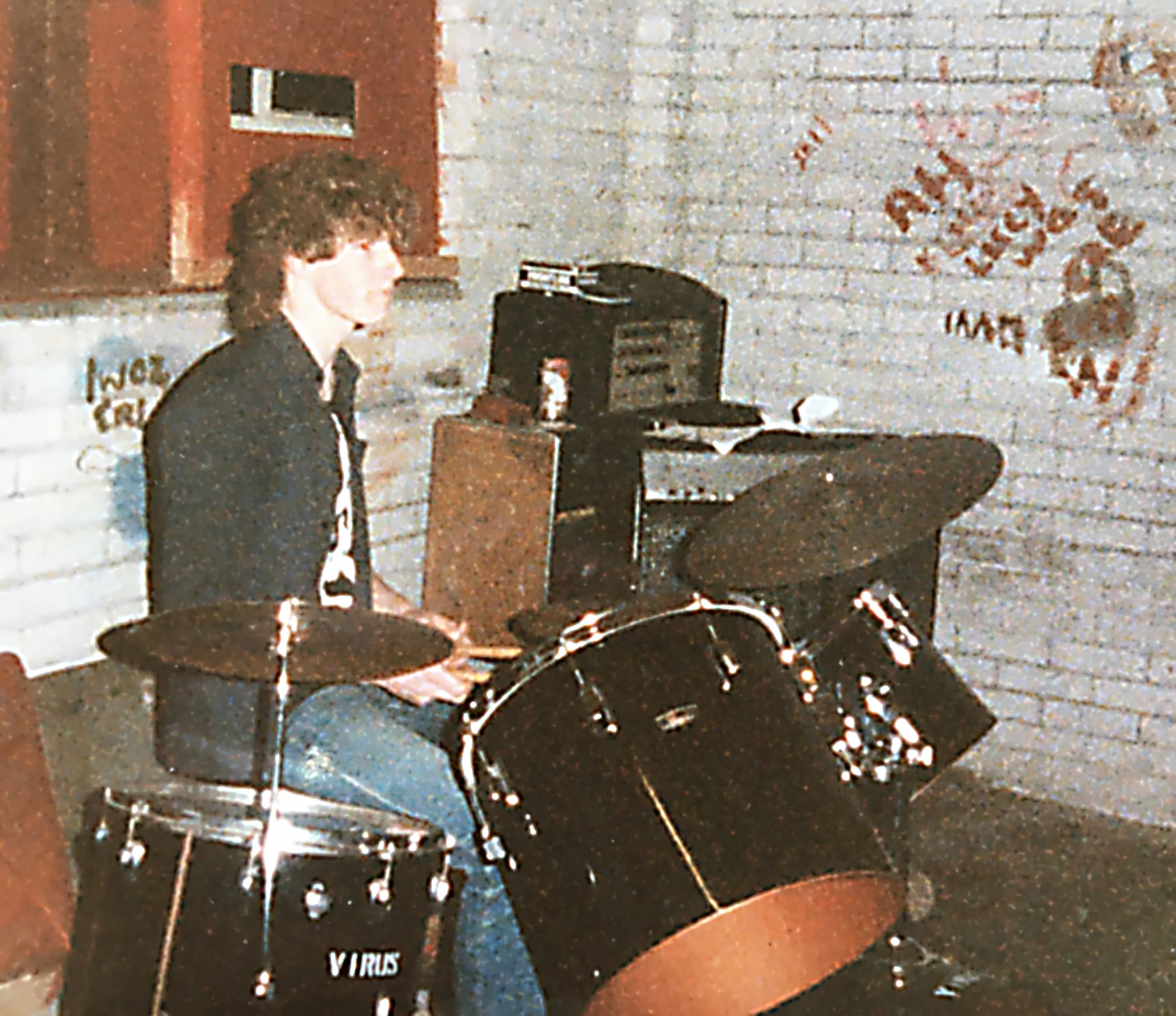 After the Youth Centre gig neither band had anything lined up in terms of live performances so we just carried on practising every night, gradually improving and Des started to come along to a few practices much to my relief as it meant I didn’t have to sing as well as play bass.

Just before Christmas of that year, Geoff put his head round the door and asked if we wanted to do a gig with the people from the Sherborne Youth Centre as he knew people there and said he could have a word. A resounding yes came back from us and he said he’d sort it – so we made plans that this would be for both bands, Nymphomania and the debut gig for The Virus. Geoff returned about half an hour later and said it’s sorted for early January and that we’d be support to their local, popular DJ. This was a bit naff in our opinion but what they hell, a gig’s a gig and there was no way we were not going to do it now. The only problem was that Gilly announced to us that he was going to be unavailable as he was off skiing with his mum and dad – oh well, Rich Brock will just have to drum for Nymphomania as well as The Virus we thought, what could go wrong?