After the debacle that was Sherborne Digby Hall, we were left licking our wounds a bit. Our live debut as Virus had been pretty much a disaster so we needed to somehow make things better for our moral. A few days after the gig at practice, Youth Centre leader Geoff Bray came to see us and had heard about the events, I think he must have felt pretty sorry for us as he said he’d just had a phone call from a band in Shaftesbury called The Unit who wanted to put a gig on at the centre, Geoff said he had agreed but on the proviso that Virus and Nymphomania could be the support bands. He said the band had agreed so in a few weeks we would have the chance to banish the memories of Sherborne. That seemed alright by all of us so we just carried on making our racket. 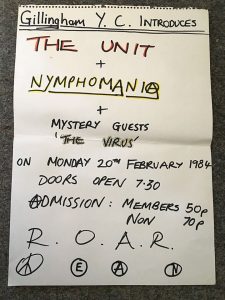 The weeks sped by and before we knew it the day of the gig was with us, strangely it was a Monday night but ‘a gig’s a gig’ as they say. We got to the Youth Centre early, probably around 5.30 as we were super keen in those days. The Unit arrived in their transit, full to the rafters with expensive equipment, including a massive PA and lighting rig – ex Shaftesbury Grammar School boys whose parents were obviously loaded and bought them whatever they wanted. They were in their early 20s and had recently been included on a local compilation album and they thought they were the bees-knees. We took an instant dislike to them, especially when they piped up saying they knew my older brother and as if by magic he appeared and started his usual bullshit of ‘my brother’s punk band are crap’.

Geoff had put up a stage in the main hall and The Unit unloaded all their gear, which seemed to get more and more over the top for the gig, they had a big drum-riser and a huge drum kit and it was then that it dawned on us that they were some kind of Genesis like soft AOR outfit but dressed in pastel trousers, flowery, tie-dye hippy type tops, facial hair and a rotten attitude. They were serious musos – they looked at us like we were something nasty they had trodden in – this wasn’t going to go well. They sounded checked for ages and reluctantly agreed to let us use their drum kit but not their amps as we would have changed all their settings. 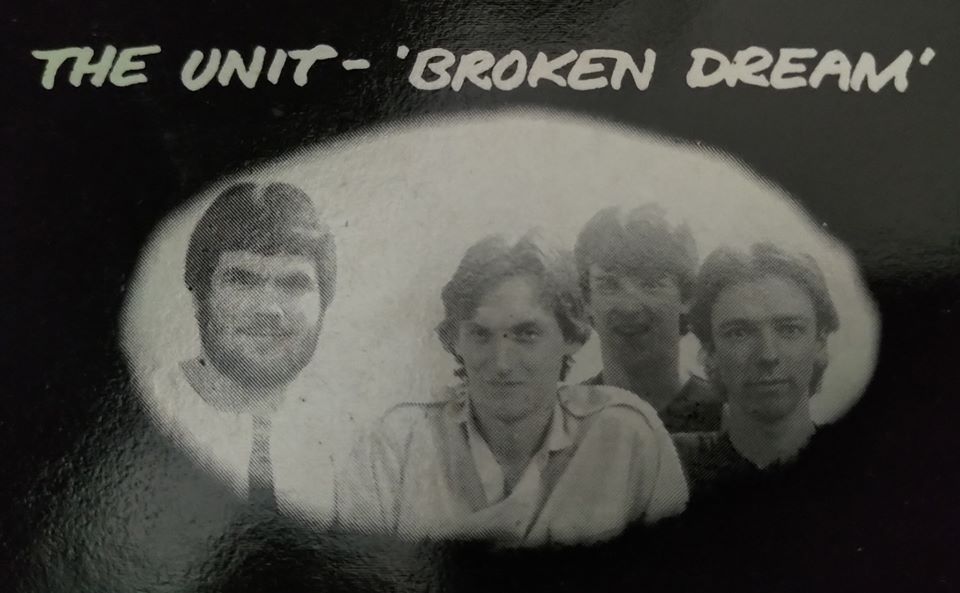 After Des’s no show at Sherborne I had pleaded with him to turn up for this gig, he said he would but he cut it fine, literally turning up as Virus were about to go on stage. I think we played 9 songs and again included DIRT’s Hiroshima and Flux’s Sick Butchers and Tube Disaster – Des made his live debut and I think we probably did OK from memory but all through our set I could see my brother at the back of the hall with the guys from The Unit who were doing the sound and lights and it was a case of them constantly taking the piss out of us. Little did they know that Crabby was stood behind them hearing everything they said and he was furious.

The reason Crabby was next to them was because he had asked them to tape the gig, both bands and the guys from The Unit had agreed. Crabby came to side of the stage and told us that basically the Unit guys and my brother were slating us (Virus) all the way through the set and that they needed to be taught a lesson. I had no idea what he meant and thought that’s just typical of my brother – he was always like that with me, never supportive, never encouraging and in my younger days he likened me to his own personal punchbag although that had stopped when I was about 11 and moved up to secondary school.

Nymphomania took to the stage and blasted straight into our noise, Crabby the most manic I’d ever seen him really thrashing his guitar. We played nearly all of our set and we could see from the stage that The Unit guys were continuing with their piss taking and this was only fuelling Crabby’s anger. After the events at Sherborne, Crabby arrived at practice one day with a new song he’d written called Armageddon which he asked to sing, well shout more like, it was his attempt to do a Discharge style song and me and Gilly tried our best to keep up with him. As he sang it we put it last in the set and Bowz could choose to either walk off stage or just jump around on it. Crabby’s wrath came to boiling point at the finale of Armageddon and he turned and kicked the huge lighting rig off the side of the stage making them crash to the floor in front of him – on the recording of that night you can hear the guys from The Unit say a few sarcastic remarks just prior to start of Armageddon but the highlight for me is the very end where you the one we had called Bungle (from Rainbow) scream into the mic ‘Fucking wreck our fucking lights!” as he saw Crabby boot the rig off the stage. 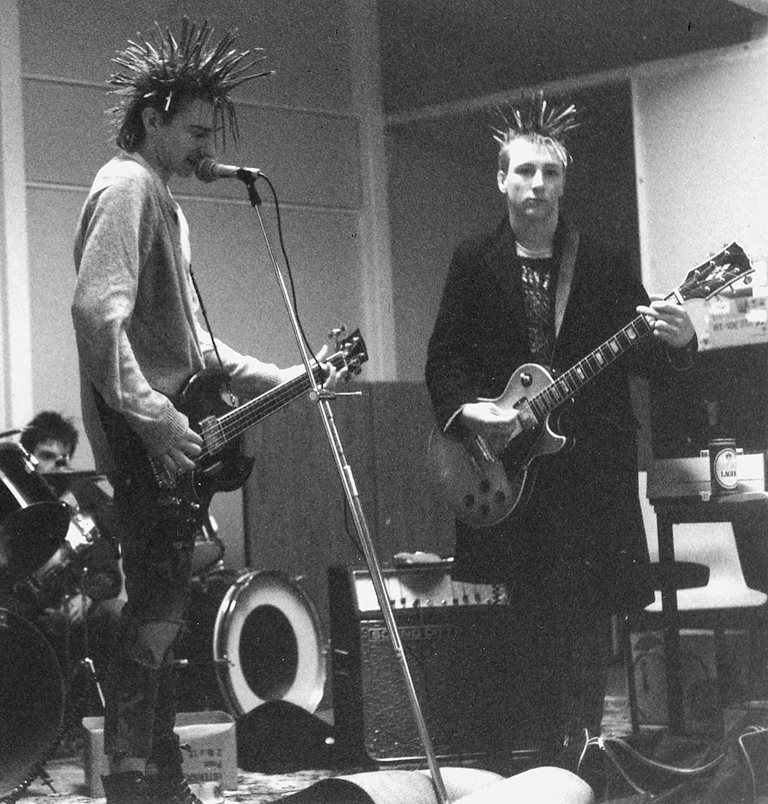 As you can imagine The Unit were furious with us, especially Crabby but he fronted them out, telling them they got what they deserved for taking the piss all night. Somehow, Geoff cooled the situation down – my brother started having a pop at me about Crabby but I said to him that he shouldn’t have been so keen to take the piss out of us and what did he expect when a bunch of middle class, stuck up, self-opinionated blokes started taking the piss out of a bunch of disreputable punk rockers.

We watched The Unit and they were typical AOR drivel that we despised – when they were on-stage we got the tape of Virus and Nymphomania before they realised it was still in the tape deck. I think if they had remembered they had it they would have refused to give it to us. This was a successful night for both bands, there was a decent turnout and we’d sent The Unit packing and they were never to be heard of again. We laughed at Crabby’s antics but he had balls and he took no shit from anyone – rightly so too, he was no nonsense and I admired that.

We all gathered in the practice room the following week to listen to the tape and Crabby was so pleased with it that he said we now needed to record all our songs in the room and make a demo tape. Crabby drove Nymphomania and he said he could get hold of a mixing desk and we’d record the songs live and just use that to get the levels with a few basic mics that we could borrow from Geoff. I think the Virus side of the tape was recorded over by mistake which in some ways is a relief but also a little bit annoying as it would be quite an experience to hear it now. 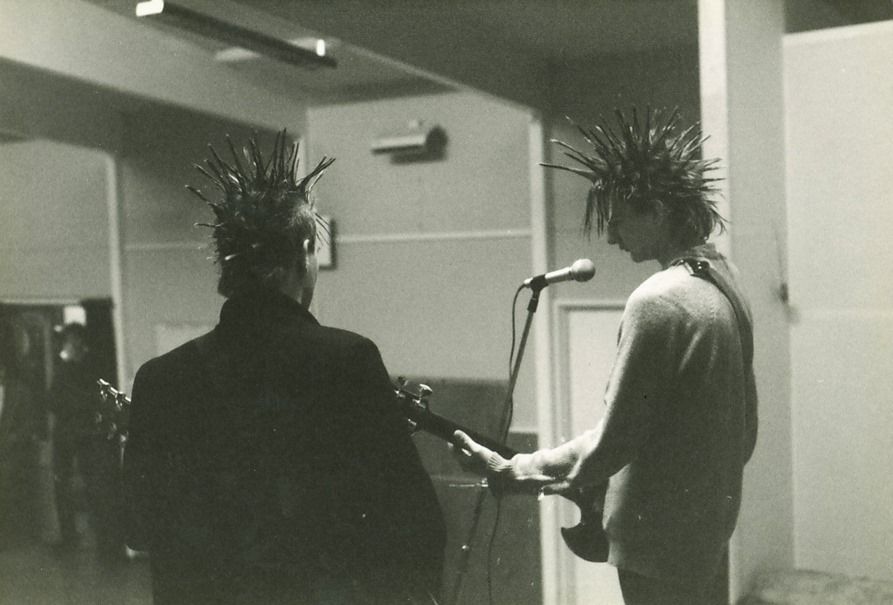 Me, Bowz and Gilly were still at school at this time, getting ready to leave and enter the big, unsuspecting world. I was doing art at school as it was the only subject I enjoyed and the art rooms offered some sort of relief to the blank wall outside the headmaster’s office that I spent most of my days staring at. They really didn’t like me at that place and I really didn’t like them! One day in the art room, a guy called Rod Taite who was in the 6th form and studying photography asked me if he could take some live photos of the band for a project. I said yes but didn’t know when our next gig was so he said he could organise a gig at Marnhull Village Hall for us and could sort it pretty quickly as he had connections with the people who ran it. So Rod and his mate Brett, came to see me a few days later and said we were on a for Saturday in March – that’s really good of them I thought, they hadn’t heard us but were up for putting us on.

It did surprise me that for a couple of very crap bands we were getting a few gigs, admittedly these were very low key, local gigs but it was a good way for us to gain experience as a band. We didn’t real hold any big ambitions as such, just to get out there and play and have a bit of fun too, yes we were political but we were also being driven by teenage hormones and dabbling with alcohol, speed and cannabis – just your typical average teenagers really but we just happened to have a punk band instead of liking Wham or whoever it was that were popular back then.

Marnhull is another of those Dorset villages that punk rock had very briefly visited, blink and you missed it and it was back to farming, hunting and a particular dislike for anyone who was an outsider. There was a guy at school in my year who had an older brother who had liked SLF and Sham 69 for about 9 months before moving on, there was another bloke in the year above me at school who was briefly into punk, influenced by his very pretentious sister who apparently was an authority on what was and wasn’t punk rock and we definitely weren’t in her still stuck in 1977 eyes. Oh well…

The gig itself was pretty uneventful – I do remember going to the local pub trying to get some take-outs but they wouldn’t serve because of the way we looked. Much to my surprise some of the local skins and punks did turn up but sadly Des didn’t manage to show up so it meant I had to sing and play bass again. Virus must have played the same set as we did at Gillingham Youth Centre, Nymphomania did a cover of The Mob’s No Doves Fly Here, with Gilly singing, it must have been awful and I’m glad that it wasn’t ever recorded. Rod got some decent photos and he and Brett seemed very happy with how it went and we were all pretty pleased to. Now all we had to do was to keep this kind of thing going but that would prove to be a lot harder than we could have imagined.

Nymphomania split and Virus record their first demo I don’t really have much recollection of Nymphomania splitting up – after the gig in Marnhull in March (1984), I only remember us doing one more gig, […]