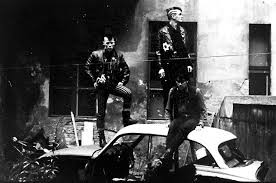 Punks were not looked favourably upon by the East German state. They represented everything that the government stood against. Punk was violent, volatile and chaotic; the complete opposite of the rigid uniformity trumpeted by authorities.

The biggest problem of punk, for the state, was that it represented the capitalistic values of its Western neighbour. A direct challenge to socialism – a crackdown on the punk rebellion was absolutely necessary to preserve order.

East German punk, or Ostpunk emerged as a by-product of the British punk scene. However, Ostpunk evolved from the mimicry of Western culture into its own platform. Unlike the idea of no future across the Western sphere, in a society that mapped out its citizens futures, East German punk was an outlet for youths to address the idea of ‘too much future’ thrust upon them. Punks generally wanted to break out of society and be treated as an individual. In the GDR, being a punk was a politically charged statement, even if it wasn’t meant to be.

Despite the creation of ‘punk havens’ in the districts of Kreuzberg and Alexanderplatz, punks were not only persecuted by state authorities, but were also victims of brutal beatings from their fellow Berliners. They were constantly monitored by cameras and informants, had their IDs checked – since their appearance didn’t match their identities, punks’ freedom of movement was severely restricted, often resulting in arbitrary arrests. Nevertheless, punks were fully aware of the consequences of their love of loud music and nonconformity. They knew that they would be excluded from school and prospective jobs, but especially that they would come into constant conflict with the police; but their desire to bring down the government outweighed the repercussions.

It was the churches that provided an unlikely ‘safe space’ for punks to perform, as a license was required in order to play the youth clubs, even if you were an amateur band. What’s more is that the churches were shielded from the authorities, although. If your band had oppositional lyrics and were in trouble with the police, as many punks were, there was no chance of playing any of these clubs. However, the Stasi (State Security Service) had informants present at these gigs, and they would write down lyrics that they determined anti-establishment.

One such group to experience the ruthless effects of the state crackdown on punk was none other than Namenlos (Nameless). They were considered an especially notorious group because of their subversive lyrics that compared the Stasi to the Nazi SS (Schutzstaffel). Consequently, all members were arrested. Drummer Mita Schamal was a minor at the time of the group’s arrest and was assigned to a psychiatric clinic, while the rest of the band were sentenced between 1 year up to 18 months imprisonment.

We’ve always been offered a pro-Western narrative about the fall of the Berlin Wall, but that’s simply not the case. The East German government wanted to permanently solve the ‘punk problem’ – the number of punks arrested and state spies infiltrating these groups increased. Irrespective of the increased suppression, punk bands like Namenlos showed that it was possible to resist and survive a systematic crackdown.

Ostpunk as Anarchy: An Introduction to the Underground German Punk Rock Scene

In East Germany, official media showed that there were no depressed or unhappy people. However, the reality was that people were anything but happy in the GDR. Under state surveillance, creativity, curiosity, and free thinking […]

No matter how hard they tried, the Stasi were unsuccessful in quashing the various punk movements popping up all over East Germany. In fact, it’s been suggested that these pissed off unruly kids were one […]