I don’t really have much recollection of Nymphomania splitting up – after the gig in Marnhull in March (1984), I only remember us doing one more gig, at The George in Wincanton and in typical Nymphomania style it was pretty much a disaster.

Crabby, Bowz and me had been over to the pub to see The Blind Dogs and Far Canal (who were a reformed Phobia but decided to go under a different name for one gig) and managed to to book a date for the gig a month or so later in May. That gig was pretty well attended for a tiny pub in rural Somerset and we were optimistic that we might be able to attract a similar crowd of bumpkin punks. 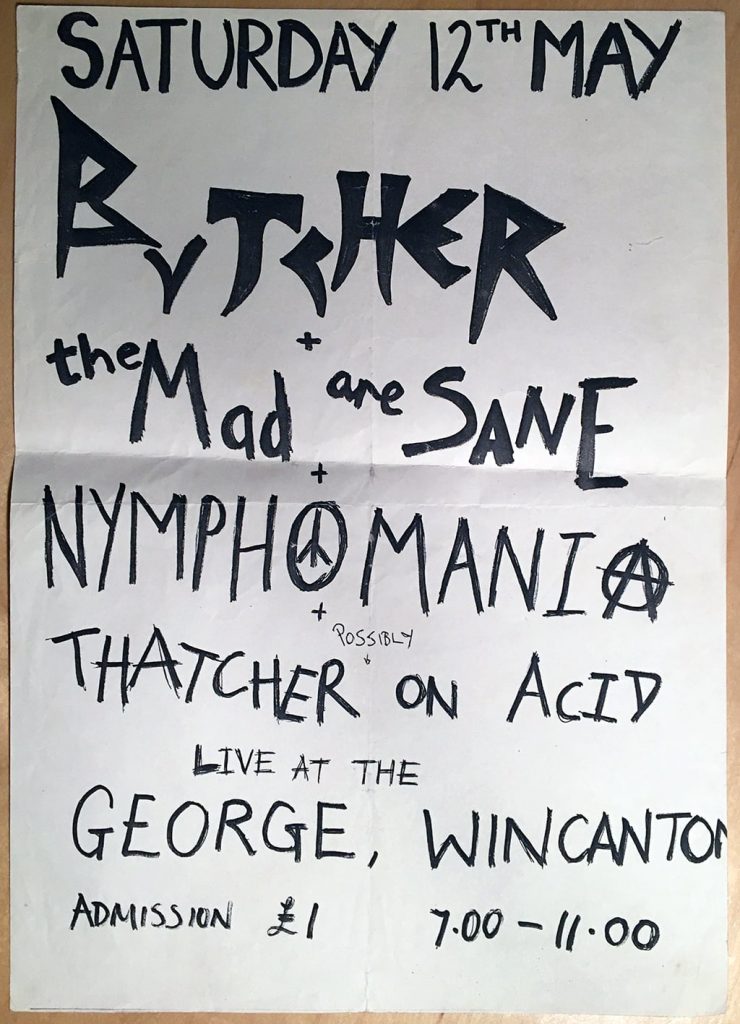 The next stage was to get the some other bands as there was no way Nymphomania and Virus could do a gig together with the tiny amount of gear we had and our very limited sets. I’d bought the first two singles by the Bournemouth punk band Butcher and thought I’d invite them to play – I had no idea about organising gigs but I somehow managed to convince them to play and the said they would bring a PA as well as their backline. Crabby had got hold of The Mad Are Sane from Bournemouth too, who together we had began to get to know after visiting them for a weekend in their Cotlands Road squat in April. They were really sound blokes and their animal rights anthem Animal Crimes had just appeared on the Mortarhate compilation album Who?What?Why?When?Where? – we finally thought that by getting them we might be able to spread our wings a bit. Crabby also asked Thatcher On Acid to play, as they were local to us although there was some animosity from them towards us as they felt we some dumb young upstarts – Crabby said they’d agreed in principle so they went on the poster. 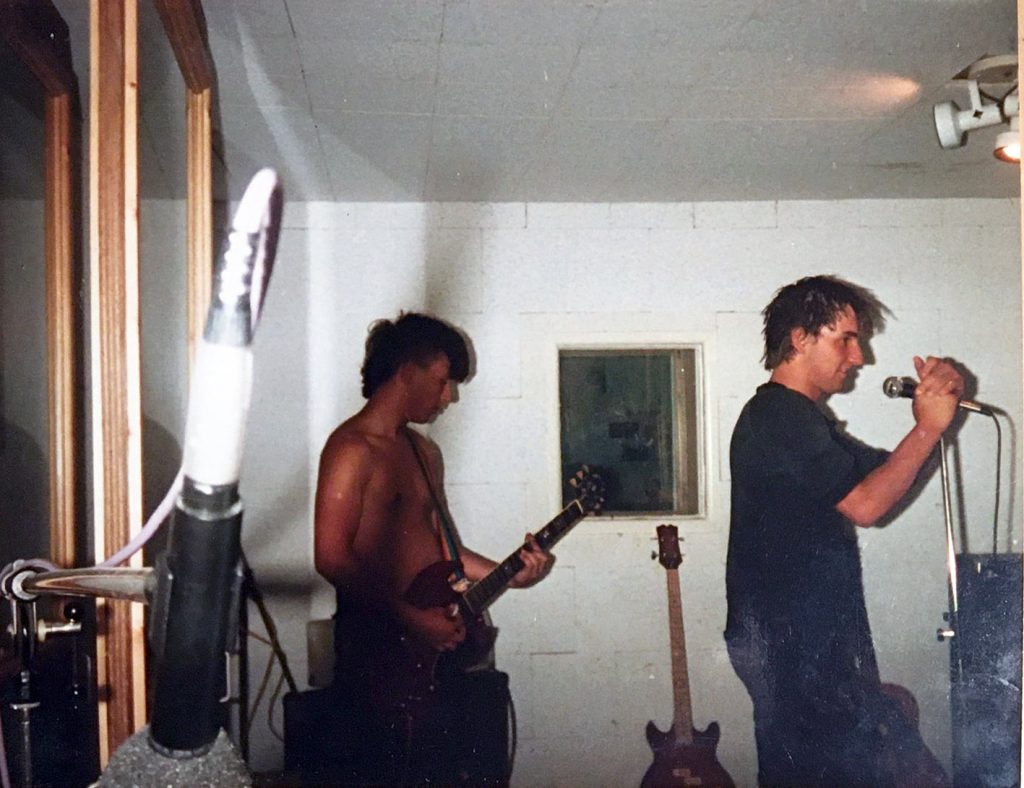 Things were looking good – three decent bands on the bill plus Virus and Nymphomania, or so I thought… it was then that Bowz dropped the bombshell that he couldn’t do the gig because he was going on a Scout camp that weekend – as you can imagine I was pretty annoyed about this, especially as he had said he wasn’t going to do any more of that sort of thing. To be fair, Bowz was still 15 and was living with his Scout leader brother and I think he felt he should do this one last one for his older sibling. So with no guitarist Virus were unable to play, we had to think of something and pretty sharpish to at least get Nymphomania to play as there was no way we were going to cancel the gig.

Crabby tried singing at first but it didn’t work, then I tried, again it didn’t work so we needed to find a temporary singer asap! I’m not sure how it happened but a friend called Eddie Lavender ending up being a substitute singer – I can’t remember if he volunteered or if we asked if but we at least had an option. We had a few rehearsals from memory and these seemed OK – it’s a tough job being the singer in a band and we thought at least we can cobble up something for the gig! 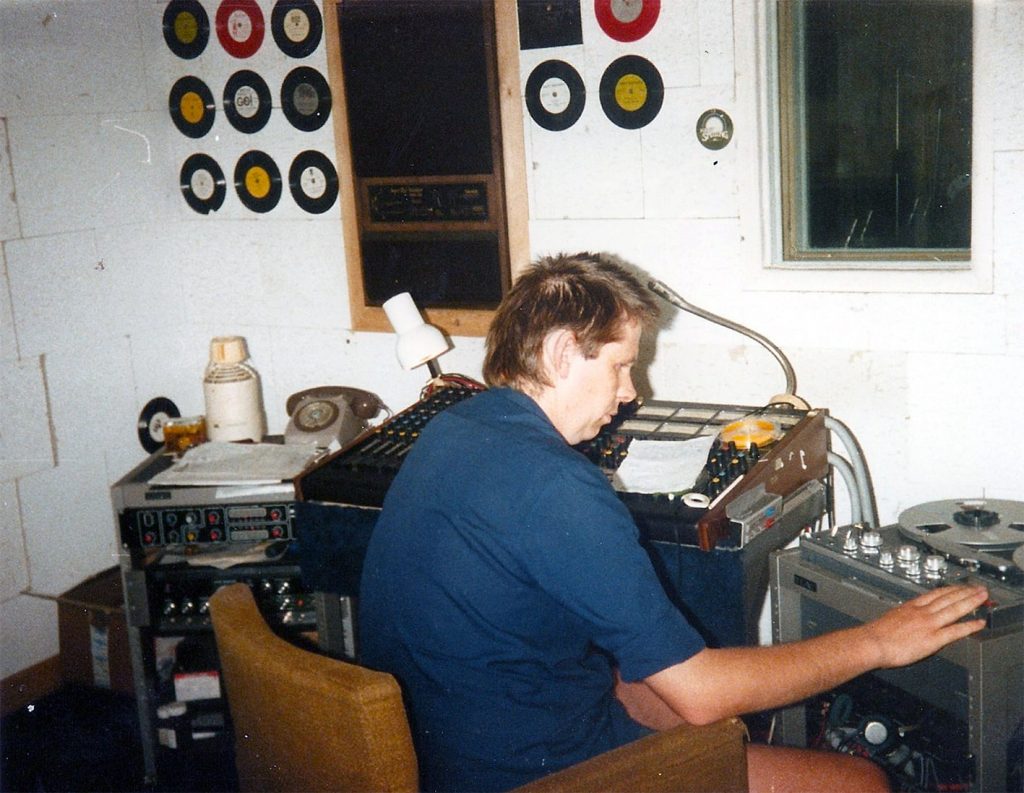 The night of the gig was a shambolic disaster but in some ways a fun disaster – firstly Thatcher On Acid didn’t turn up, I wasn’t surprised as they’d probably seen they were to open and thought it was beneath them – they really did have a bit of a funny attitude. Nymphomania were awful, well in truth we were always awful but on this occasion shockingly awful! – it was by far the worst gig we ever played, I’m not sure if Eddie froze from stage fright or he just wanted out at the last minute but hardly any words were uttered from his mouth and I knew from that moment that as a band we were finished, which to be honest was a relief.

The PA was playing up but The Mad Are Sane blew the pub off the face of the earth – they were loud, tight and in their singer Mark, had an absolutely mesmerising front man, not only did he look punk as fuck but he spat out his furious lyrics like an enraged cobra that was looking to sink it’s fangs into the apathetic audience. 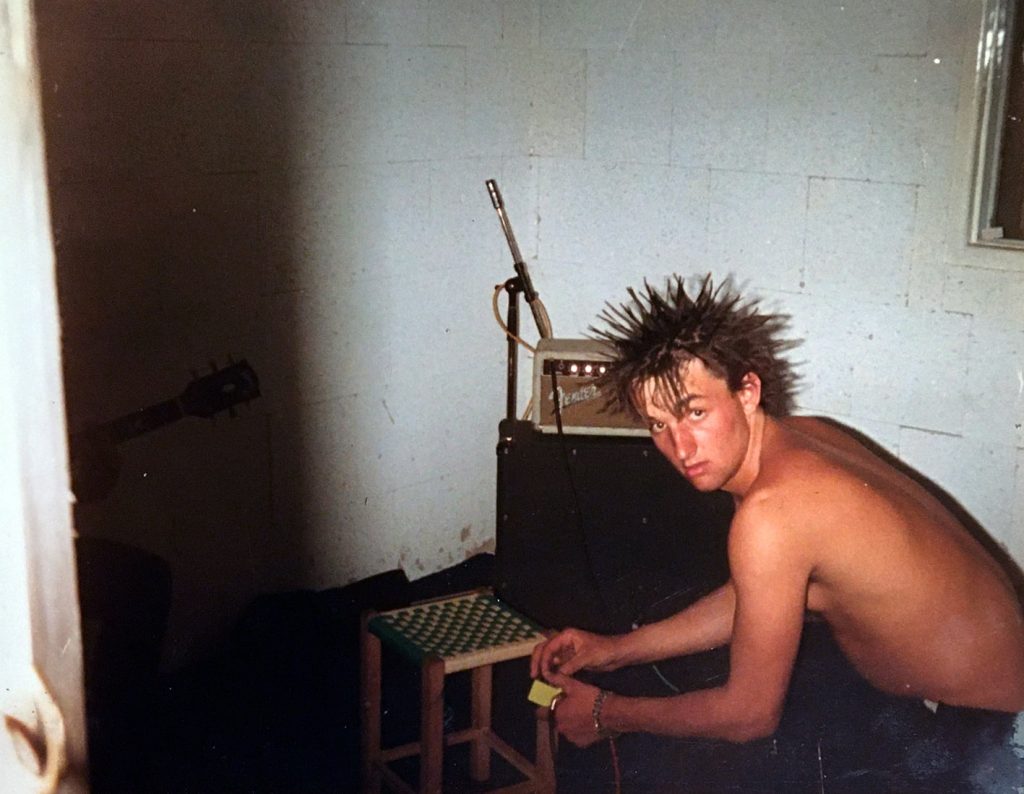 By the time Butcher played their PA was really wanting to go into retirement – it was a shame as they were a good band and offered a more melodic approach to punk rock. Still they seemed happy enough to play a gig outside of Bournemouth and I think we probably managed to give them £30 for their efforts – we gave The Mad Are Sane the same. We didn’t think that we should get anything for our shitty efforts. After the gig I talked a lot to the guys in The Mad Are Sane and they said they’d get Virus a gig in Bournemouth later that year as a thank you for getting them up to this gig. I couldn’t quite believe that, outside of the Blind Dogs it was probably the first decent thing a fellow punk band had offered us.

A week or so later Crabby said he was moving into the Cotlands Road squat and that was that for Nymphomania – Bowz and me were happy to concentrate on Virus so that suited us. Gilly went off to his first love of football so it kind of all worked out.

Although I had been fed up with Bowz for not being able to do the Wincanton gig I actually think he’d done us a favour in the long run. We were having trouble convincing Des it was worth the effort of being in Virus so we’d booked ourselves into Monitor, the local 8-track recording studio where some other local punk bands we had heard of and/or seen live had recorded demos. Bearing in mind we only had about 8, not very well rehearsed songs it was a bit of crazy thing to do but it was our only way of getting Des to do something. Monitor was £55 a day at the time which seemed really cheap and the owner Chris Hardcastle said we could use all the studio gear so we thought what the hell let’s do it. 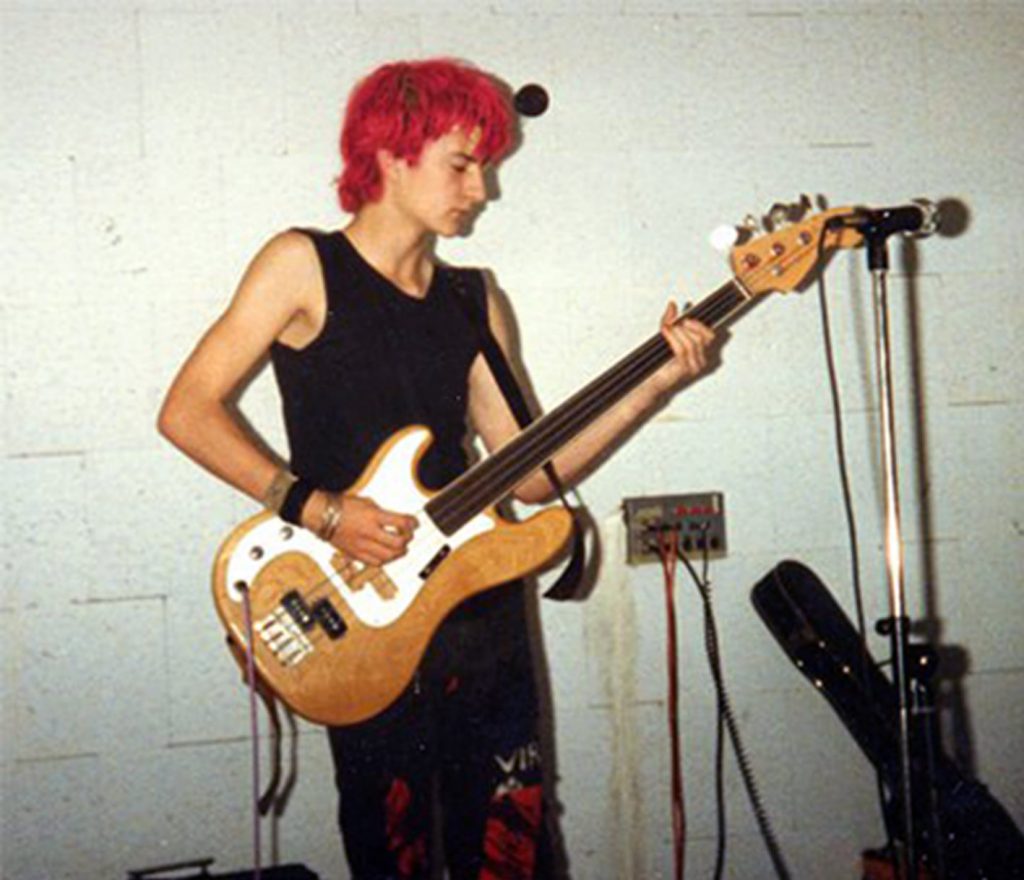 At the end of May we went into the studio, I remember it was a boiling hot weekend and that it was sweltering inside. The studio itself offered a seven-piece drum kit which delighted Rich, and as it was all set up we didn’t waste hours getting the drums set up, tuned and then sounding ‘just right’. The drum kit might have been good but the guitar and bass amps were pretty knackered – we had no idea how the recording process worked or how to get a decent sound out of equipment we were unfamiliar with – we were also nervous as hell as we were so sloppy and Chris was a seriously talented musician. Having said that, he was a nice guy and made us feel relaxed although our performances were still very loose. We raced through the first day recording all the drums, all the bass and all the guitars to eight songs – we went home and chatted about what we’d done and Des expressed his disappointment in the guitar sound – he had wanted a much heavier sound but we didn’t really have any idea how to get such a sound with the studio gear.

We decided we’d take Bowz’s amp and try again the following day as we at least knew that was ‘our’ sound. Chris wasn’t exactly thrilled and explained we simply didn’t have enough time to re-record all the guitars for all the tracks but as a compromise he’d let us redo one song. We decided to do Six Second Slaughter and the guitar sound on that song was much more what we wanted but we still had to get on and record all the vocals and mix the songs by the end of the day. I’ve no idea how but we managed to do that and we left on the Sunday evening knowing that in a few days we could return and Chris would have dubbed off the 20 copies we’d got included in the studio price 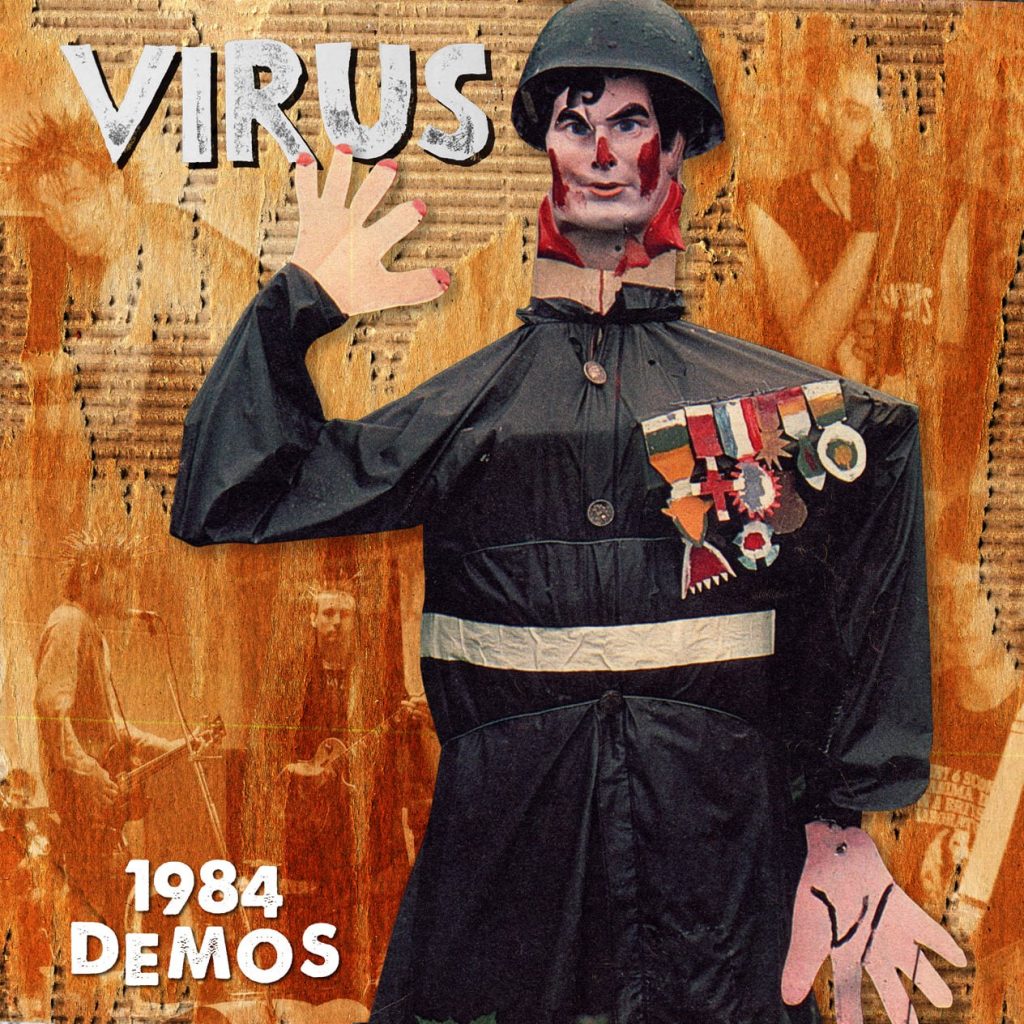 We decided to call the demo Infected and I knocked up a front cover very quickly then just as we were about the release it Des announced he was quitting the band. This was a huge blow to us as Bowz and me both looked up to him a lot as he was three years older than us and in our eyes was the best punk singer we could ever get. So now we had 20 copies of a demo tape that had a singer no longer in the band and more importantly we needed to find a replacement as soon as possible… 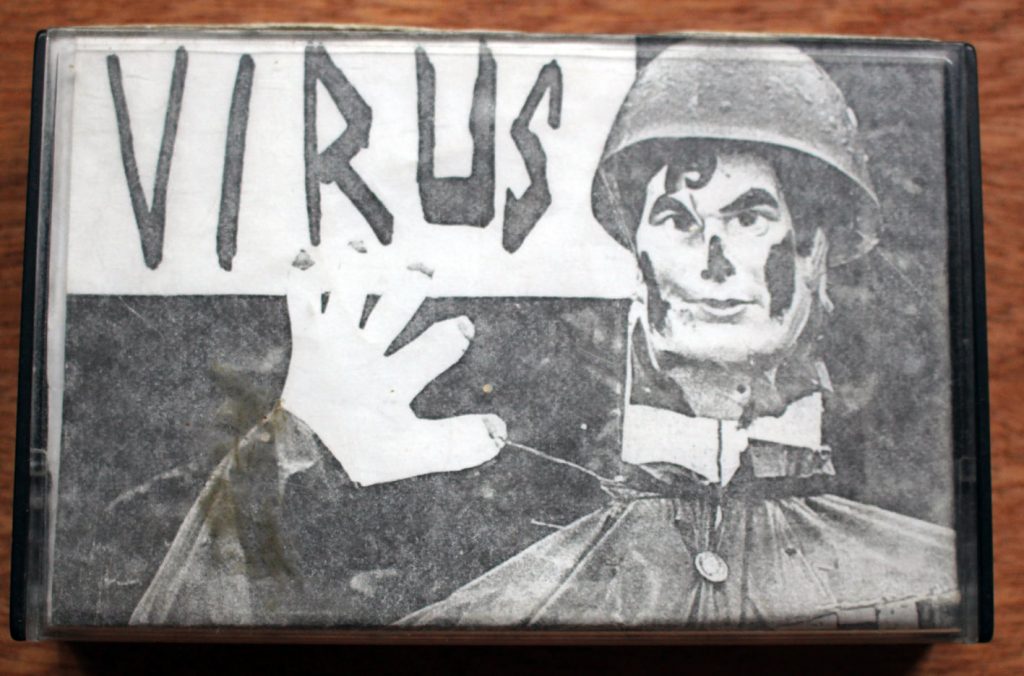 Footnote: 33 years after Infected was recorded, it was released on vinyl on the album ‘1984 Demos’ by Urinal Vinyl and Vomito Punk Records.

Photos: Poster for gig in Wincanton, Virus in the studio recording the Infected demo with Chris Hardcastle at the controls, Infected demo and 1984 Demos LP.

Crabby upsets The Unit and Marnhull Village Hall. After the debacle that was Sherborne Digby Hall, we were left licking our wounds a bit. Our live debut as Virus had been pretty much a disaster […]