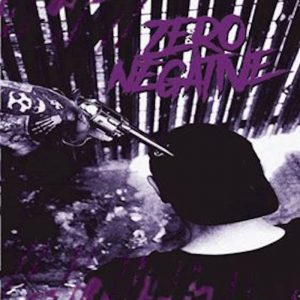 Sunderland’s Zero Negative have been likened to Raw Power and after hearing these 2 EPs from them, I can see perhaps how that comparison is well-founded. Not a direct rip by any means, the ‘power’ is definitely there but has an originality of its own.

The first self-titled EP was great listening and this new one that has just been released is better again, taking the catchyness of the prior release’s “I Am Free” and turning it up a notch or two.

Production on this release seems clearer, indeed the whole package is more evolved, from the disc’s container upgrade to the inclusion of soundbites that act as track intros, “II” illustrates the band’s continual progression.

Like so many other bands, these guys are best checked out in a live environment and I’d say to any promoters qondering if ZN are worth a punt or not, to take this EP and give it a few spins.

5 tracks are offered on this second outing and after a short soundbite we are plunged headlong into the USA-influenced fast hardcore beat of “Clinically Depressed” that carries you along with it.

Before you know it, you’re into the second track “Energy” which as the title suggests, shows no sign of letting up the aural assault whatsoever.

“Something To Tide You Over” is next, with it’s long intro soundbite remixed from possibly an old 80s horror film (“Creepshow” maybe?) that ushers you into an instrumental track – something a bit different from the usual but great, nonetheless, to listen to.

“No Remorse” is a more mid-paced affair, with a nice shout-along chorus! Surprisingly short for its pace, too.

Pick this gem up from the band at a gig or via Serial Bowl Records’ Bandcamp page.

Jaded Eyes – Call of the Void

Serial Bowl Records It’s been a while since Jaded Eyes’ first 7″ Hate was reviewed here and it’s good to see them have a full-length release out eventually. The hoarse vocals are still there and […]

[Serial Bowl Records] Hot on the heels of the recent release “Five Lost Songs” comes this one – missing a trick calling it “4 New Songs” and offering it as a double-bundle. Nonetheless, it’s another […]

Nikt Nic Nie Wie – NNNW189LP This was sent on by the band member Kristoffer Holden Axiö and I wasn’t sure what to expect at first. I’d heard a sample and thought it was pretty […]